skip to main | skip to sidebar

Perhaps the finest bit of riding I've seen this year.

In this final (?) chapter, here's the only non-Ashura Ares in the Army, a late model Force. This one actually has a euro BB, which I guess is rare. Got this one off GF too and actually want to ride this seriously. Need a seat and post, but otherwise it is built up. St. Martin bars, KHE stem, Odyssey Forks, Nankai front and rear hubs A few blue anodized parts to accent the build.
I think this should be the last Ares I build, my garage certainly can't hold any more bicycles. But who knows what will come up on eBay or GF in the future. Plus, local PDX rider Patrick has an AY frame he knows I've wanted for a while now. Plus, during my upcoming trip to Japan, I might find myself in a bmx shop and figuring out logistics of getting a Garuda home. 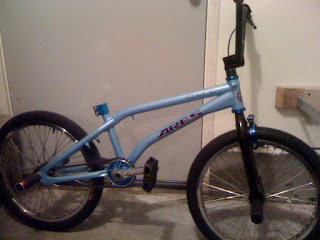 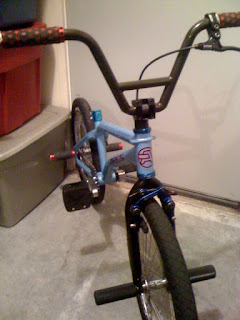 This one is a mix of old and new. Ashura frame of course, but coupled with Garuda forks and AY bars. The stem is an older (and way heavy 88 stem). It's a black beauty for sure. Ares lock on grips are super nice, though the compound is a bit soft and they tear/grind way too easy. That 99er seat is NOS that I found at a mail order shop in Europe. Spry Ti Seat Clamp from Bret - Primo Tube Steak pegs (way too big). Nankai rear, Odyssey front. 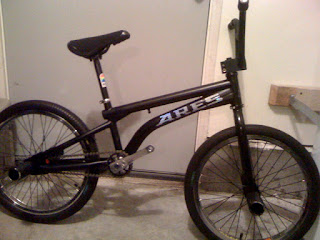 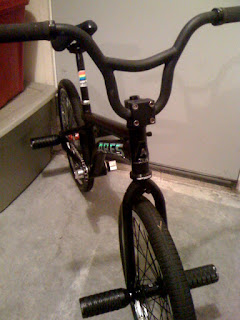 A bit of fun, this one. I love red frames. I found this frame I think on GF. I had a red Eastern stem that sort of matched in color. The Odyssey bars and GT forks got fresh powder to match. I then had the idea to find some Tuff Wheels and found this set (complete with coaster brake!) on ebay. A red Snafu clamp, red headset cups and red Threshhold sprocket with some FSA cranks round out the highlights. Now I need to start working on those pedal pickers. 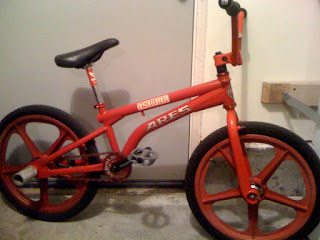 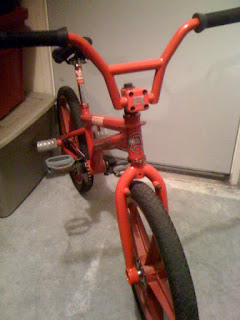 This one is by far the prettiest. I found this frame/fork/wheel/crank set-up for sale on BMX Museum. It's a pretty nice white powder coat finish. I found NOS D.I.T.A. bars for sale on global. The Dragonfly Doozer stem came off a Powell bike I bought in Portland. Ares pegs in the back. A few more bits and voila.

It's used now as the bike I surf on, or otherwise just eye candy. 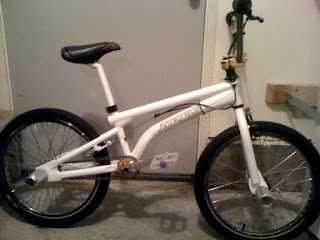 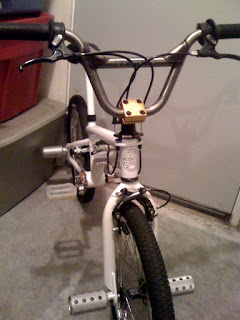 In this episode, one of the rougher members of the army, as far as parts list anyway. It's a real hodge podge of parts to put this beast together. 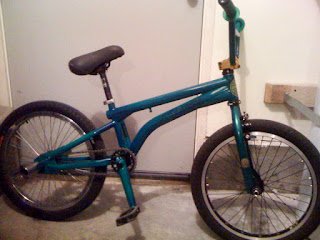 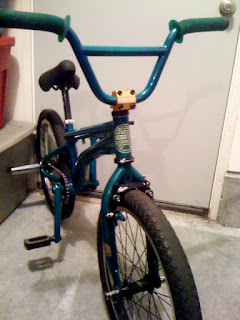 So somewhere around 2000 or 2001 I really became enamored with the Ares Ashura. I think it triggered something from the days I loved the GT Pro Freestyle Tour. I've always liked curves.

While living in Japan I finally upgraded to an Ashura (I mistakenly bought a Hoffman EP when an Ashura was the same price). I rode it for a year or so. When it was finally time to move back to the states, I decided to give it away to a friend who simply needed a bicycle. I always wished I had that bike back.

Fast forward to 2008, I found an Ashura for sale on Global-Flat, then another one on eBay, then another and so on and so on. I have 5 Ashura and 1 Force now. It's out of hand, but oh well. All of the Ares I have acquired over the past couple of years have needed something: new powder coating, a bunch of parts, stickers. They are not show bikes. They're just cool to me.

Here's the first. This one needed new powder coat (flat black). I just had the frame but over the course of 2 years accumulated a lot of original Ares parts. It has probably the most original Ares parts of any in the army:
Ashura Frame - DITA Fork - 88 Bars - 88 Stem - 88 Cranks - 88 Sprocket - 88 Seat Clamp - 88 Tires - 88 Pegs - 88 Grips. The other parts are mixed: Wellgo pedals (88 copies) - 99er Seat - Primo Rod Post - Odyssey Gyro - Dia-Comple Brake Setup - Nankai rear hub - Odyssey Vandero fron hub. It's a tank, not very easy to ride compared to the St. Martin, but I love this bike. 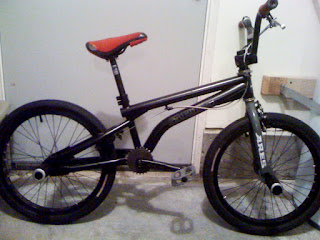 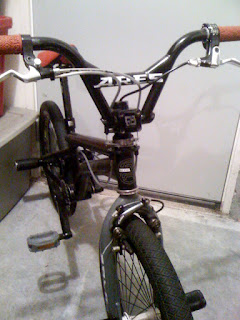